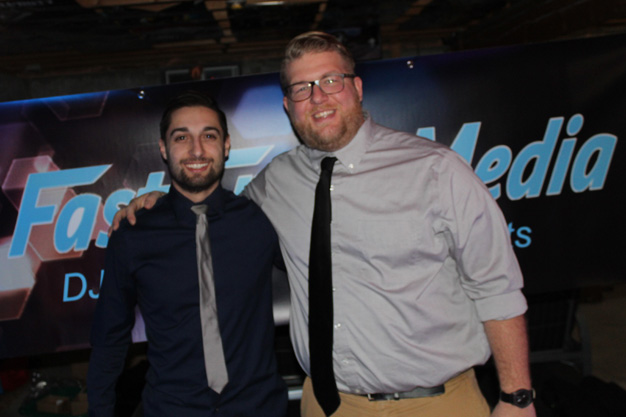 The Fast Track Media Group as an idea about 10 years ago, as Jason and Bryan the two owners of fast track met as a Coach and student athlete. Jason and Bryan crossed paths at some point in 2008 as Jason was the Head coach of a Track and Field team and Bryan was one of the premier distance runners in the state.

As we fast forward Jason became a Television Production teacher at the same High School that Jason Coached Track and Field at. In the classroom Bryan became one of Jason’s top students in the field of Television and Broadcast. That year Bryan Graduated and went on to Hartford University where he Earned a Degree in Communications with a concentration in Media and Broadcasting.

While Bryan was in college he created his own Business DJ Quity where he worked a local venues hosting events and all types of gatherings. After Bryan graduated he went on to work for the Kraft group at Gillette Stadium Djing for events on site as well as being an Audio Video technician. As Bryan built his own legacy he toured on a cruise line as a featured DJ in the caribbean,he worked for another multi million dollar corporation in Power Station located in connecticut, Bryan was contracted out as a DJ through this company working all types of events.

Now, during this time Bryan and Jason were always still in touch, they coached together for a little while and referred business to each other as Bryan had his own DJ business and Jason Had his own Production Business.

Jason grew up in Shrewsbury as his mother helped create and establish Shrewsbury Public Access. In Shrewsbury jason grew up helping on all the sets, working cameras, learning how to edit, create and produce his entire life. As Jason went through life he always practiced Videography as a hobby recording videos for local government, always opting to do his projects on camera, local churches, weddings and so much more.

He graduated from Fitchburg State University with a degree in English , then he went and got his Vocational certification to teach in the area of Television and Radio Broadcasting. Following, Jason Attended Anna Maria College where he received his Masters degree in Business Administration, as he had aspirations of creating his own business one day.

As Jason and Bryan both had their own Businesses they spoke with each other and decided to combine their companies. They wanted to create an all in one wedding service business offering DJ, Videography , Photo Booths, Lighting and one day Photography. Now 2018 Bryan and Jason Have done just that, they have been practicing their trades day in and day out, they have local referrals, local residence at Venues, they have built their individual names and their quality proves to compete with everyone in the industry.

They are proud owners of The Fast Track Media Group. Jason and Bryan are in the Business to make people smile to give people the absolute best customer service, the most high quality Video and Sound productions , Lighting design and a memorable evening with an unforgettable experience.